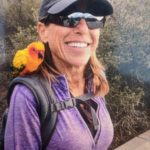 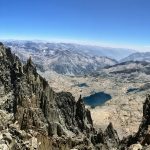 At 4:30pm on August 26th, two climbers were on a portion of the Palisade Traverse in the North Couloir of Thunderbolt Peak when the male of the party took a 300-foot tumbling fall suffering major trauma. The party had a PLB (personal locator beacon) which they activated. Sequoia and Kings National Park (SEKI) took the […] 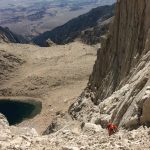 From July 20th to 24th, 2016, Inyo SAR participated in a search for a missing hiker on Mt Whitney. As the search grew, new evidence suggested the hiker was last seen on the western side of the Sierra Crest, and thus in Sequoia National Park. Sequoia and Inyo coordinated a joint effort involving many teams […] 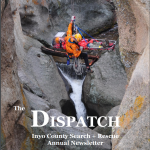 Download and read our annual newsletter. (PDF document) Features include lots of pretty pictures, the story of a technical rescue from the patient’s perspective, and an analysis of a hyponatremia case on Mt Whitney. Dispatch 2015 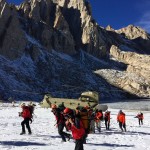 In the afternoon of Saturday November 21, search and rescue volunteers from from numerous California Mountain Rescue Association teams were flown to Meysan Lake to continue the search for Michael Meyers. Based on the location of the helmet that was located and recovered on November 20, teams planned to search avalanche debris in the vicinity […]