On the afternoon of 9/5/2020, Inyo SAR responded to a 4WD vehicle rollover on the back of Coyote Flat with major injuries. At approximately 1200, a single Jeep rolled three times down a steep embankment. It was initially reported there were four passengers. Big Pine Fire Department responded in two OHVs. Five Inyo SAR members, including an EMT and paramedic, responded with ICSO deputies in ICSO OHVs. California Highway Patrol’s Inland Air Division H-80 was also requested from Apple Valley, CA.

At approximately 1500, the first Inyo SAR team arrived at the location. Big Pine Fire Dept. had extricated the more critical patient (patient #1) on a backboard and moved him approximately 50 yards up a steep slope to the road. There was no cervical collar on the patient because the patient had lost consciousness when it was placed by Big Pine Fire. There were also two women who had been restrained passengers in the rolled vehicle. Both women were walking around before the arrival of SAR and were deemed “walking wounded.” Both denied any injury, though one stated she felt woozy. A Big Pine Fire personnel was asked to stay with them while the other patient was moved. Patient #1 had reportedly had a seat belt, but became unrestrained during the crash and was found just below the rolled vehicle.

Upon Inyo SAR arrival to the scene, H-80 was approximately 15 minutes out. Patient #1 was assessed and found to have multiple injuries to the face, chest, abdomen, and shoulder. He was drowsy, but able to answer questions appropriately and was administered oxygen. Per Big Pine Fire, he had lost consciousness twice since their arrival. Inyo SAR members continued carrying patient #1 toward the designated LZ until H-80 arrived. Patient #1 stated he was feeling nauseous soon before H-80 arrived. Upon arrival, a report was given to their flight medic. The H-80 medic started an IV and gave anti-nausea medication. Patient #1 was then loaded into the helicopter and transported directly to a trauma center.

After the helicopter took off, one of the other two passengers was determined to also need medical care due to feeling faint, and having a large lump on her head. The other two OHVs arrived with a separate Symons Ambulance crew. Care of the remaining patients was then transferred to Symons, and all parties were driven off Coyote Flat down to Bishop via OHV. Patient #2 was loaded into Symons Ambulance and transported to local hospital.

Lessons to be learned: Seat belts save lives. This was a low-speed incident with serious injuries in a remote location. It took first responders well over an hour to reach the accident location on Coyote Flat. 4WD activities are often very remote and rescue is not always this easy for critical patients. 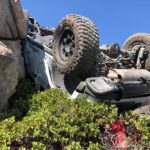 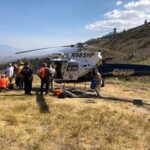